Fantastic GANs and where to find them

This is a series of blog posts. Click here for the second part.

Have you ever wanted to know about Generative Adversarial Networks (GANs)? Maybe you just want to catch up on the topic? Or maybe you simply want to see how these networks have been refined over these last years? Well, in these cases, this post might interest you!

First things first, this is what you won’t find in this post:

If you are familiar with GANs you can probably skip this section.

If you are reading this, chances are that you have heard GANs are pretty promising. Is the hype justified? This is what Yann LeCun, director of Facebook AI, thinks about them:

“Generative Adversarial Networks is the most interesting idea in the last ten years in machine learning.”

I personally think that GANs have a huge potential but we still have a lot to figure out. 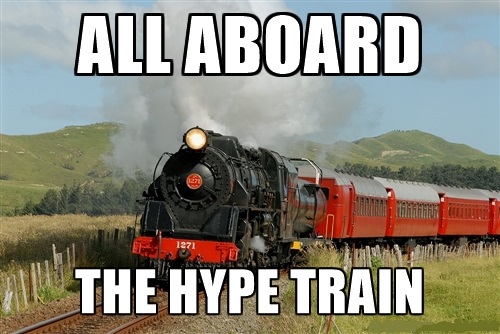 So, what are GANs? I’m going to describe them very briefly. In case you are not familiar with them and want to know more, there are a lot of great sites with good explanations. As a personal recommendation, I like the ones from Eric Jang and Brandon Amos.

At first, the generator generates images. It does this by sampling a vector noise Z from a simple distribution (e.g. normal) and then upsampling this vector up to an image. In the first iterations, these images will look very noisy. Then, the discriminator is given fake and real images and learns to distinguish them. The generator later receives the “feedback” of the discriminator through a backpropagation step, becoming better at generating images. At the end, we want that the distribution of fake images is as close as possible to the distribution of real images. Or, in simple words, we want fake images to look as plausible as possible.

It is worth mentioning that due to the minimax optimization used in GANs, the training might be quite unstable. There are some hacks, though, that you can use for a more robust training.

This is as an example of how generated face images progressively become more real:

Output of a GAN during its first two epochs. Dataset used is CelebA.

If you are interested in a basic implementation of GANs, here are a bunch of links to short and simple codes:

These are not state-of-the-art, but they are good to grasp the idea. If you are looking for the best implementation to make your own stuff, take a look at this later section.

Here I’m going to describe in roughly chronological order some of the relevant progress and types of GANs that have been showing up over these last years.

TL;DR: DCGANs were the first major improvement on the GAN architecture. They are more stable in terms of training and generate higher quality samples.

The authors of the DCGAN focused on improving the architecture of the original vanilla GAN. I presume they had to spend quite a long time doing the most exciting thing about deep learning: try a lot of parameters! Yay! At the end, it totally paid off. Among other things, they found out that:

DCGANs are also relevant because they have become one of the main baselines to implement and use GANs. Shortly after the publication of this paper, there were different accessible implementations in Theano, Torch, Tensorflow and Chainer available to test with whatever dataset you can think of. So, if you come across strange generated datasets you can totally blame these guys.

From this point on, all the types of GANs that I’m going to describe will be assumed to have a DCGAN architecture, unless the opposite is specified.

TL;DR: A series of techniques that improve the previous DCGAN. For example, this improved baseline allow generating better high-resolution images.

One of the main problems related to GANs is their convergence. It is not guaranteed and despite the architecture refinement of the DCGAN, the training can still be quite unstable. In this paper, the authors propose different enhancements on the GAN training. Here are some of them:

All these techniques allow the model to be better at generating high resolution images, which is one of the weak points of GANs. As a comparison, see the difference between the original DCGAN and the improved DCGAN on 128x128 images: 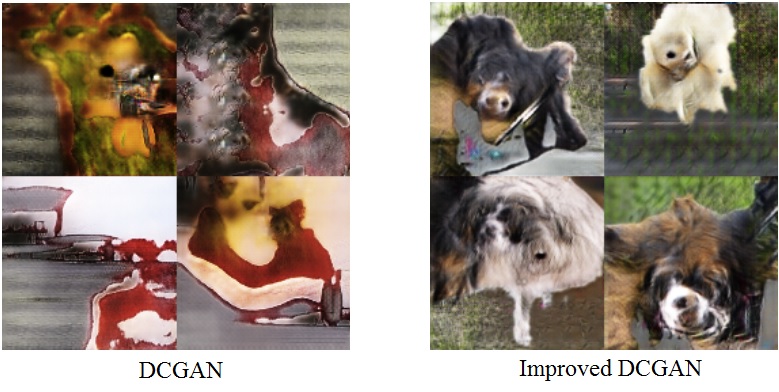 These are supposed to be dog images. As you can see, DCGAN fails to represent them, while with improved DCGAN you can at least see that there is some doggy thing going on. This also shows another of the limitations of GANs, that is, generating structured content.

TL;DR: these are GANs that use extra label information. This results in better quality images and being able to control – to an extent – how generated images will look.

Conditional GANs are an extension of the GAN framework. Here we have conditional information Y that describes some aspect of the data. For example, if we are dealing with faces, Y could describe attributes such as hair color or gender. Then, this attribute information is inserted in both the generator and the discriminator.

Overview of a conditional GAN with face attributes information.

There are lots of interesting articles on the subject. Among them, I highlight these two: 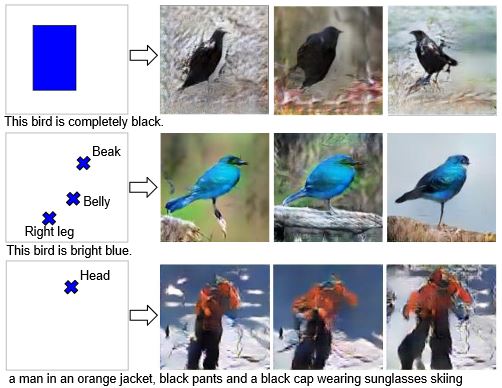 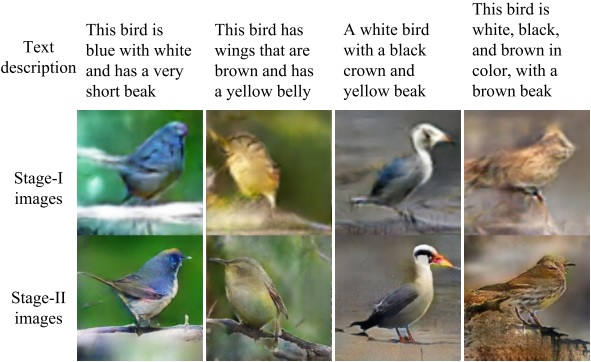 TL;DR: GANs that are able to encode meaningful image features in part of the noise vector Z in an unsupervised manner. For example, encode the rotation of a digit.

Have you ever wondered what kind of information does the input noise Z encode in a GAN? It usually encodes different types of features of the images in a very “noisy” way. For example, you could take one position of the Z vector, and interpolate its values from -1 and 1. This is what you would see on a model trained on MNIST digit dataset: 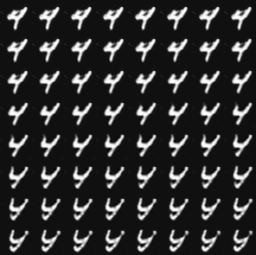 Interpolation on Z. Top left image has the Z position set to -1. Then, it gets interpolated to 1 (bottom right image).

In the figure above, the generated image seems a kind of 4 slowly transformed into a “Y” (most likely, a fusion between a 4 and a 9). So, this is what I am referring to by encoding this information in a noisy manner: one single position of Z is a parameter of more than one feature of the image. In this case, this position changed the digit itself (from 4 to 9, sort of) and the style (from bold to italic). Then, you could not define any exact meaning for that position of Z.

What if we could have some of the positions of Z to represent unique and constrained information, just as the conditional information Y in cGAN does? For example, what if the first position was a value between 0 and 9 that controlled the number of the digit, and the second position controlled their rotation? This is what the authors propose in their article. The interesting part is that, unlike cGANs, they achieve this in an unsupervised approach, without label information.

This is how they do it. They take Z vector and split it into two parts: C and Z.

How do they force C to encode these features? They change the loss function to prevent the GAN from simply ignoring C. So, they apply an information-theoretic regularization which ensures a high mutual information between C and the generator distribution. In other words, if C changes, the generated images needs to change, too. As a result, you can’t explicitly control what type of information will be encoded in C, but each position of C should have a unique meaning. See some visual examples:

However, there’s a price to pay for not using label information. The limitation here is that these encodings only work with fairly simple datasets, such as MNIST digits. Moreover, you still need to “hand-craft” each position of C. In the article, for example, they need to specify that the 1st position of C is an integer between 0 and 9 so it fits with the 10 digit classes of the dataset. So, you might consider this not to be 100% unsupervised, as you might need to provide some minor details to the model.

TL;DR: Change the loss function to include the Wasserstein distance. As a result, WassGANs have loss functions that correlate with image quality. Also, training stability improves and is not as dependent on the architecture.

GANs have always had problems with convergence and, as a consequence, you don’t really know when to stop training them. In other words, the loss function doesn’t correlate with image quality. This is a big headache because:

Do you know when to stop training just by looking at this figure? Me neither.

This interpretability issue is one of the problems that Wasserstein GANs aims to solve. How? GANs can be interpreted to minimize the Jensen-Shannon divergence, which is 0 if the real and fake distribution don’t overlap (which is usually the case). So, instead of minimizing the JS divergence, the authors use the Wasserstein distance, which describes the distance between the “points” from one distribution to the other. This is roughly the main idea, but if you would like to know more, I highly recommend visiting this link for a more in-depth analysis or reading the article itself.

So, WassGAN has a loss function that correlates with image quality and enables convergence. It is also more stable, meaning that it is not as dependent on the architecture. For example, it works quite well even if you remove batch normalization or try weird architectures. 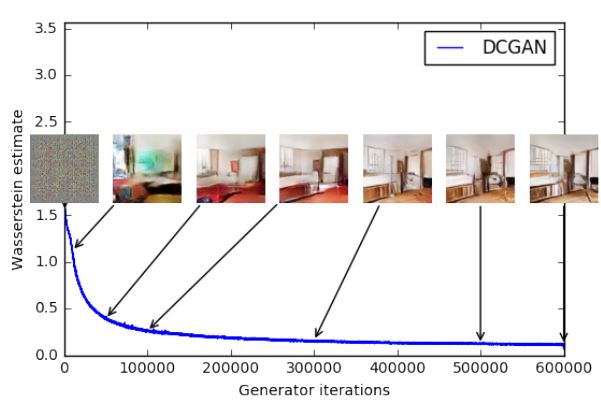 This is the plot of the WassGAN loss function. The lower the loss, the higher the image quality. Neat!

So, that’s all for now! I know that there is still more interesting research to comment, but in this post I decided to focus on a limited set. Just to name a few, here is a short list of articles that I have not commented, in case you want to check them out:

For an extensive research list, check this link. Also, in this repo you will find all sorts of GAN implementations in Tensorflow and Torch.

Thanks for reading! If you think there’s something wrong, inaccurate or want to make any suggestion, please let me know in the comment section below or in this reddit thread. Feel free also to ask me or comment anything.